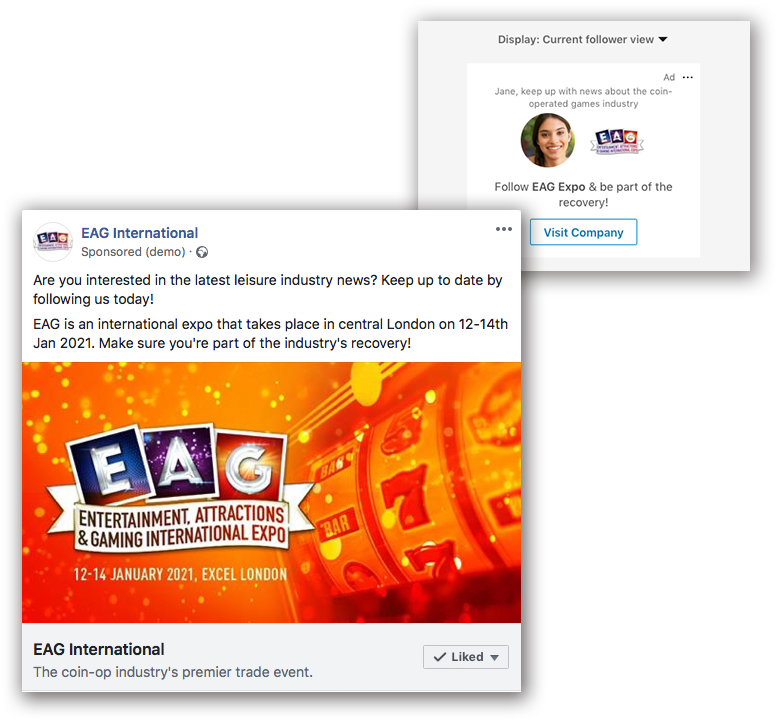 The Entertainment, Attractions & Gaming International Expo (EAG) is an annual trade show for the coin-operated games and wider leisure industry that takes place in January each year at ExCeL London.

Due to the 2020 Covid-19 pandemic, which caused the leisure industry to grind to a halt, creating financial difficulties, uncertainty and unprecedented worry across the industry, many potential exhibitors were nervous about committing to the cost of exhibiting at EAG 2021.

The organisers of EAG, Swan Events, recognised that their social media content needed to reach a larger audience in order to promote the event more effectively in future years. So, rather than embarking on the usual pre-show marketing to encourage exhibitors to book stands at EAG 2021, during April and May when all leisure operations were closed to the public, they decided to do things differently and tasked Oyster with developing a social media follower campaign to increase international followers and build engagement across EAG’s four social media platforms (Facebook, Instagram, LinkedIn and Twitter). Then, when the industry opened up again, they would have a larger social media audience to engage with.

Swan also wanted to reinforce EAG’s position as a trustworthy ally during these difficult times and to instil confidence in the industry, especially as EAG 2021 would be one of the first leisure industry trade shows to open its doors post-pandemic. Oyster was therefore also commissioned to develop some appropriate social media content to acknowledge the difficulties the industry was facing and to look ahead to the industry’s recovery.

When we began advertising on Facebook the EAG page only had a few hundred followers. Our task was to grow the number of a followers and raise awareness of EAG across a multitude of countries including United Kingdom, Italy, Spain, France, Greece, Portugal, Poland, Germany, Belgium, Dubai and Saudi Arabia. We developed a paid follower campaign by creating an A/B split test and trialled two different types of copy. Facebook quickly became one the more successful mediums and the number of page likes grew extremely quick in every country.

Twitter was already a popular platform for EAG, but when we trialled Twitter advertising the ‘cost per follower’ proved expensive so we decided to pause the paid advertising and focus solely on content marketing. The Twitter audience was super active and engaged, so our content enticed people to share and comment on our posts which increased the number of followers organically.

As part of the social media follower campaign we rolled out two ads on LinkedIn: a dynamic follower ad and a newsfeed ad. We tested both to see which would attract the most attention to the EAG page and generate the most page follows. Our targeting was super niche, so our target audience was relatively small, however we successfully generated a good number of engagements and highly relevant followers, including directors of family entertainment centres, zoos, amusements parks and many others.

We took a slightly different approach on Instagram as there is currently no option to create a follower campaign on the platform. Instead we decided to raise awareness of the EAG page. Our ad was promoted within the newsfeed, the explore section and within the stories feature. This generated an incredible amount of traffic to EAG’s profile and our ad reached 19,368 people and generated 26,030 impressions for a cost of £0.79 per link click.

In addition to paid advertising, as part of the social media follower campaign we created a content marketing schedule for April and May to reinforce the positive messaging in the paid campaigns about the industry’s road to recovery.  We also used social media to promote an associated webinar called ‘Getting Ready for Reopening’. Our social media posts drove traffic to the webinar sign-up page and the campaign was considered a huge success. Swan decided to continue creating webinars during the pandemic for us to promote across all social media platforms.

A mixture of organic posts and paid advertising saw EAG’s social media followers increase by 781 and achieve a huge volume of impressions and engagement across all four social media platforms, while our goal of attracting 150 sign-ups for the webinar was comfortably exceeded. When the industry is back in business, we will begin marketing EAG 2021 in earnest.

Post activity note: Sadly EAG 2021 has been postponed due to the ongoing pandemic.

If you need help with paid advertising on any platform, please get in contact by emailing info@oysterstudios.com or call +44 (0)1582 761212.

We’d love to speak to you.